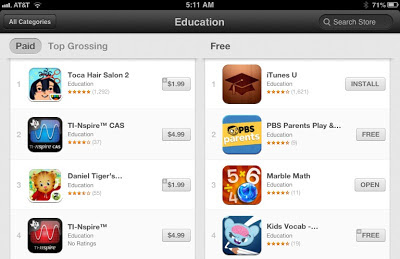 Did you catch our Marble Math app giveaway on Friday 3/8?

I really hope you're not one of the 110 people who missed out and paid to download it on Sunday (but if you are, thank you.)

With our new Mystery Math Town app set to launch in a matter of weeks, we decided to run a free promo to give our app titles a jolt ahead of the new release. And what better way to do it than with our old friends at Moms With Apps and the generous support of the App Friday team.

We made Marble Math free (normally $1.99) on Friday 3/8 for the promotion. This is the first time Marble Math has been free since its June release.

Normally, we send a press release to announce our promotions but we decided to run this giveaway with only direct support from our network and social media.

I tried to run a couple of paid/promoted Facebook posts but both were rejected for having too many words in the images (apparently, your image cannot be more than 20% text). I'll have more on this this at another time in another post, but let's just say it was frustrating to say the least.

On the other hand, I feel nothing but love for Twitter and it appears the feeling is mutual. I don't know who told the virtual coupon clippers that we were giving away our app, but they showed up in force on Friday and I salute them, and #freeapp loving tweeters everywhere, for their tidal wave of support. It's really amazing when you can just stand back and watch your SM stream light up with strangers promoting your app for you.

We also got a nice boost from App Advice as they included Marble Math in their Friday Apps Gone Free feature. They asked us to let the promo run an extra day to make sure everyone had a chance to download the app, so we extended the offer through Saturday.

So how did we do?

With over 75,000 apps in the Education category, it's getting harder and harder to make a dent in the Top 100 charts and I was expecting the resistance to Top 5 would be so great it would be virtually impenetrable.

Nevertheless, Top 5 was our target.

Marble Math peaked at #3 on the Education charts (yes, I was up at 5am Sat) with over 20k downloads on Friday.

In other words, we passed Mickey Mouse on the Education charts.

We added another 10k downloads on Sat. 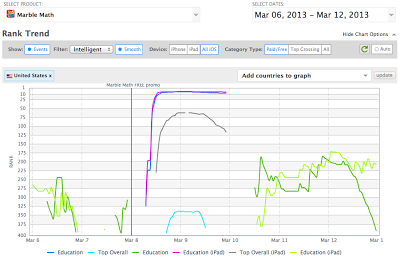 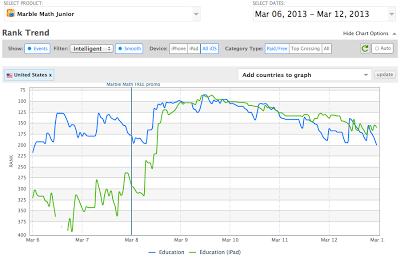 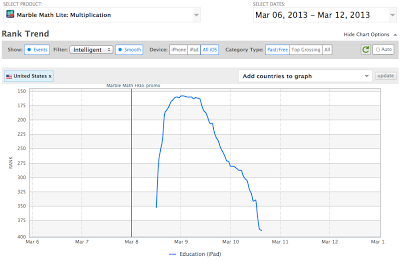 Even better, Marble Math pulled the rest of the Marble Math family up with it. Paid sales for Marble Math Junior went up considerably and downloads for our free Marble Math Lite: Multiplication also bounced.

Today ranks and sales are settling back to the usual Top 150 to 200 but still better than average for this time of year.

We asked for a jolt and that's exactly what we got.

Hopefully, we can ride this wave right into our Mystery Math Town launch in a few weeks.