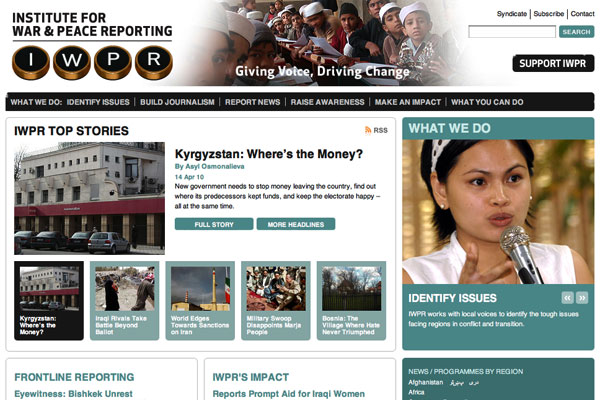 After over three months of around-the-clock-effort from an international development team lead by Jim here in Pleasantville and Tarrant Marshall in Australia for Artgig, along with our friends at ESI Design in Manhattan and the Institute of War and Peace Reporting team in London, we are extremely pleased to announce the launch of the new IWPR corporate news website. ESI had been working on this project for over a year when they brought us in and handed off a 70-plus page design spec for production.

We knew the three-month timeline was aggressive, especially considering there were other development teams in the mix working on ancillary components, but in typical Jim fashion, he didn't even blink - he just rolled up his sleeves and got to work with Tarrant in a routine that involved few breaks for air and lots of Skyping.

Amongst the many virtues of the new Drupal site aside from the new look, is easier, faster access to uploading and editing news and articles from not only everywhere in the world but everyone, including journalists in the field - and they can do it in any language they choose. It’s a picture of democracy blooming not only in struggling nations, but in journalism itself. And the open source platform will allow IWPR to continue and expand their work long after we've gone.

It's a difficult concept for westerners, because we're used to standing up and being heard, regardless of what we have to say. Or despite what we have to say, in most cases, and we don’t even have to stand up. Free speech is a luxury we take for granted. IWPR mentors communities for whom this concept is new and often dangerous, with services, equipment and this new website. They teach, encourage, support and disseminate.

But the beautiful part is the greater transparency of the entire process, which is in fact the main purpose of the organization, and indeed of journalism in any form. Every new iteration of the site allows more small voices a megaphone, brings more stories by the people to the people, cultivates understanding and empathy, and along the way enlightens us all and prompts action in the name of justice. Now that's a website to be proud of.