Bonnie and Clyde in Pleasantville 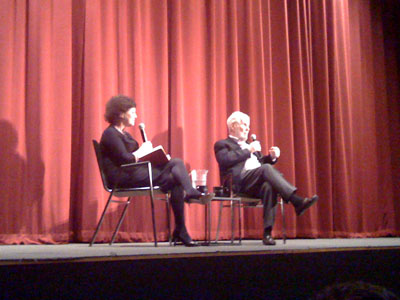 They're young...they're in love...and they kill people.

So goes the famous tagline for the film classic, "Bonnie and Clyde."

I caught a special screening last night at Jacob Burns, featuring a discussion with screenwriter, Robert Benton, after the show.

Unlike my scoop on Slumdog Millionaire before it broke out, this was an evening in retrospect.

After living through the Tarantino age of ultra-violent cinema, it's difficult to imagine the impact this film had on film culture when it hit American theaters in 1967.

Incredibly violent and heavily stylized for the day, Bonnie and Clyde was accused of glorifying violence and was largely panned by critics upon release.

But audiences loved it, and the critics eventually came around...

I'd seen Bonnie and Clyde previously some years ago, at home, on a not particularly big screen and I remembered liking it, but seeing a film in a real movie theater puts it in an entirely different light.

Two big things that jumped off the screen:

The film is violent.

Yes, the film romanticizes the story of two criminals, but as Benton commented, it's not about the violence, it's about the fame.

It was really fascinating to hear Benton's story about his big break–boy grows up wrestling dyslexia, finds film as a creative outlet, becomes a young hotshot art director at Esquire, hangs with other young creative types–all are passionate about French New Wave cinema, Benton decides to write a screenplay with pal, David Newman, who can actually write, they get some good momentum but the screenplay languishes for years until Warren Beatty comes knocking.

Benton recalled his big break–the call from Warren, and how it was also his first big mistake in his marriage, only six months young. Warren called Benton at his little apartment in New York and told him he'd heard about the script and he wanted to stop by and pick it up (remember, no email, no fax...) Benton was happy to oblige but he neglected to tell his young wife that WARREN BEATTY was dropping by, so she was just kind of bumming around with curlers in her hair and no make-up when Beatty came knocking. According to Benton, she didn't speak to him for some time after that...