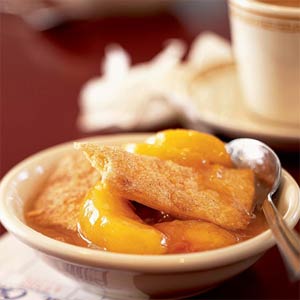 I happen to like peach cobbler - a lot.I’m not sure how this love affair began, but it started with a perfect peach cobbler on one occasion many years ago and I’ve been chasing the high ever since.Unfortunately, it’s much easier to find bad, overly-sweetened, careless cobbler than it is the delicious pinnacle of desserts I recall and crave.So the other day, out of the blue, my wife announces she’s making me peach cobbler - “tomorrow."She says.She even had the peaches to prove it.But tomorrow arrived, and as the day wore on, I sensed a change in the winds - plans were shifting as they so often do in the harsh light of reality.Unfortunately, she had timed her cobbler announcement with our nephew’s birthday party, for which she was already baking cupcakes and brownies.I knew there was going to be no cobbler before the official announcement came.I was told to eat cupcakes and that was it.I also knew that with each passing minute, the likelihood of the cobbler happening at all was more and more likely a fleeting fantasy.After all, it was a busy weekend with kids and there’s only so much time for dessert baking splurges.I didn’t say a word.The weekend was over - cobbler-less.On Monday, upon arriving home from work, she shocked me - “I’m making you your cobbler tonight.” she announced.After dinner she set about the making and baking of my succulent surprise as I played with the kids in the other room.And then I heard it.A baker’s groan from the kitchen.And another one - louder, in case I hadn’t heard the first.“These peaches are bad.”And that was it.The end.In response to this abrupt dashing of dreams, I said to my wife “The only thing worse than no peach cobbler at all, is someone promising you peach cobbler and not delivering.”

And that’s kind of how I feel about Apple and my iPad.I mean, Apple definitely got further with the iPad than my wife did with the cobbler.The iPad is a wonderfully intuitive and sexy device - most of the time.But what I expected (and what I feel Apple led me to believe I was getting), and what I got, are two different things.IOS 4.2 is rumored to launch tomorrow and that should resolve some of the clunkiness, enabling basic functions like multitasking and printing.And I’m not going to get started on Flash because it’s not going to happen - and I knew that when I purchased (but I’d still rather have the option to run Flash or not, instead of stumbling upon gaping content potholes when browsing the web).But Flash aside, I find web browsing and emailing, and most other basic tasks (even navigating the App store) are just not as easy as they they are on my two-year-old, big, heavy, unsexy MacBook.The iPad seems, well, really good at apps, if that’s your thing.And there’s no question it’s a fantastic tool for kids with endless possibilities for education and entertainment.It’s not bad.But I expect better from Apple.I expected the iPad would be a MacBook killer for me.And I welcomed it.I wanted it.The iPad is the perfect size to cozy up with in bed - like a good book.The MacBook in bed? Please. Only if I’ve had too much to drink.But lately, I find me and my wife are reaching for the MacBook and not the iPad - even in bed.When it comes down to getting content and getting things done, it’s just easier to do it on the MacBook.