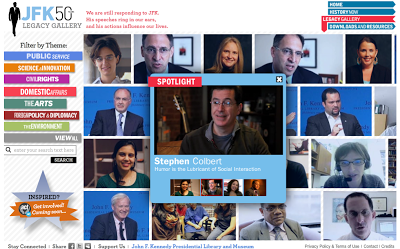 Back to those killer videos... JFK was a media-savvy guy and he embraced all platforms of communication. You can see it in the televised addresses, radio speeches, photographs and films of everything he did, and how he made all this media available to as many people as possible. So we went out of our way to incorporate as much video and audio as we could. In addition to the JFK historical media, there is a growing library of videos in the Legacy Gallery that show how the JFK legacy has affected the lives and work of people today, ranging from Matt Damon and Wynton Marsalis to Stephen Colbert and Nancy Pelosi.

And finally, there is a Downloads and Resources section of the website, making themed content available to students and teachers for use in personal or classroom projects.

JFK seized the hearts and minds of America and inspired a nation to form a community focused on change. Since we launched the site on Jan 20th - the 50th anniversary of Kennedy’s inauguration speech, I’ve talked to a number of clients, friends, and family, who were there in the 60’s - and the site is clearly stirring memories and emotions. That is impressive. What would really be impressive is if we can achieve our goal, and inspire a younger generation to carry the torch. Who knows? Maybe a future president is looking at History Now, right now.