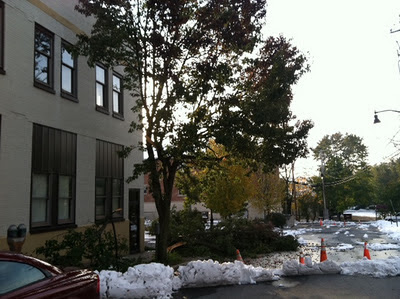 What was all that white stuff that blanketed our town and crippled the Artgig command center for nearly the entire week?

It's too soon to say the "s" word out loud, but this week was a trip down Artgig memory lane.

Once upon a time, before Artgig got all fancy with a brick and mortar studio, we all worked from home.

As legend has it, way back in the days before Skype, the Artgig gang would meet around town, alternating between the diner and Jean Jacques, when we all needed to be in the same place to discuss really important things – like becoming a brick and mortar business.

When we arrived for work Monday morning and found a tree had knocked down the building power line, we assumed it would be a minor disruption and it really wasn't so bad taking Halloween off to spend with the kids.

Four days later, it had turned into a beard growing contest between me and Jim (I won), and I was ready to fire my one and a half year old co-worker for continuously ignoring my orders to stop eating my Wacom stylus.

Despite the challenges of work and home lives colliding, amazingly, I am happy to report we reached a new pinnacle of production before power was finally restored yesterday.

It seems with less pressure to do things like shave and bathe, our app output actually increased!

In a few short days we cranked out a nearly-final Alien Buddies app build, a sweet Shake-a-Phrase update with new words and sharing features, and a Being Benny update.

All while juggling client projects and grocery shopping duties!

That's how we roll here at Artgig.