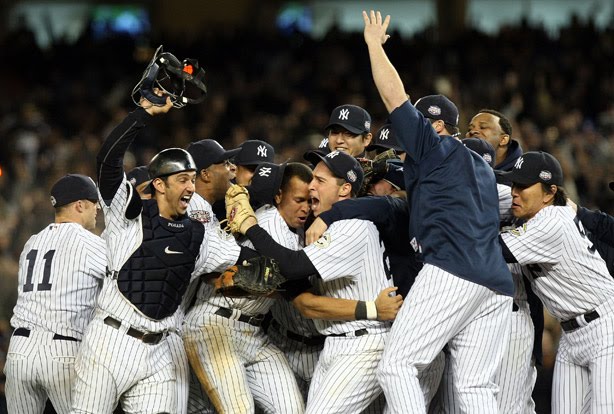 The Yanks beat the scrappy Phillies last night 7-3 on the strength of a giant performance from Godzilla himself, Hideki Matsui, to end the east coast slug fest at six games.It's good to bring the title back to the Bronx.Too bad we won't be at the victory parade tomorrow.

I'm only a casual fan, and to be honest, it's been a while since I've cared much about the Yankees but this Postseason at the new stadium has brought all the good times and good memories rushing back.

What New Yorker could forget the magical Yankees of the late 90's, led by their fearless manager and Harrison resident Joe Torre, winning four World Series titles in five years?

The fourth title was actually in 2000 against the Mets.I was in the bleachers at the infamous Clemens bat-throwing game but I always forget that was a World Series game because it felt more like another Subway Series to me.

And I was there for the start of it all, in 1996 at the center of another controversy - the Jeffery Maier game. The Yankees were down in the bottom of the eighth against the Orioles when Rookie of the Year, Derek Jeter, hit a ball that made it into the stands with a little help from a 12-yr-old fan. The Yankees went on to beat the Orioles and win the World Series against the Braves. Their current manager, Joe Girardi, was the catcher back then.

I remember my first Yankees victory parade that same year.The experience of walking up the stairs from the subway to the street above into a giant New York street party with people and confetti everywhere was fantastic!

I remember watching the '99 Yanks, at an apartment with my roommate and friends - glued to the television for three weeks in October as the Yankees steam-rolled to another title against the Braves. We had these individual player posters ripped from the Daily News and when a player wasn't hitting - we put them out in the hall until they started hitting again.

And I vaguely remember the Randy Johnson/Giambi/A-Bust years when I could care less.

But this one, the inaugural year in the new stadium, is special - again.Rivera, Posada, Pettite, Jeter, Damon, Matsui - this one's for the old guys and old times.Rivera at 39 is older than me!

I've grown up with these Yankees.And along the way, we've learned some valuable lessons:

Money is no guarantee of success.A team is built on chemistry - not individual accomplishment.It's not easy to get to the finish line and it's even harder to win.And if you get there, if you do reach your ultimate goal...savor it - it's not something to take for granted.

These are the lessons.

And yes, A-Rod is forgiven.

Thanks for the memories.I get to share this one with my son.